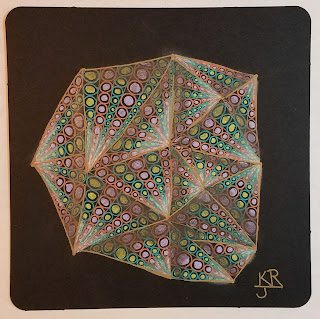 I'm several days behind getting with the projects this time due to seasonal allergies getting me down. I am very much enjoying the videos. If you haven't purchased yours yet, you can still get a pack from zentangle.com or your local CZT. Zentangle.com has joined with Sakura to promote their latest gelly roll pens and they're simply fabulous!
The pens are Sakura's latest Moonlight opaque #06 pens. You get 5 pens from the packs along with a General's white chalk pencil, black graphite pencil, 2 tortillions and a lot of paper tiles in white, Renaissance, and black. The pens dry really fast, making it a quicker turnaround time for shading. Here is my first day tile completed. We used a black Apprentice tile with tangle Munchin. I liked the way Munchin was drawn. I think I used to draw this as a triangle first, then fill in. In this video, it's drawn with two legs, then straight lines filling in until the last leg is drawn. This seems to give more control. And, as usual, the magic happens when the shading and especially when the highlights are applied. Enjoy! Thanks, Molly and Julie for the great video!
I am still working on my Compass Rose and can't wait to finish it. What a fabulous project.
Posted by Tangled Moons at 8:46 AM No comments:

Rick Roberts and Maria Thomas have done it again. They and the Zentangle® staff have come up with another wonderful set of videos to further extend the wonders of Zentangle. This recent set (available on You Tube) feature a series of cartouches. The kits which coordinate this set feature a deckle edge scissors to give old photos that aged look, also a great place to start tangling.
My first attempt was to tangle an old photograph of my grandfather. I love the old pinstripes and hat in this photo. I could have paid more attention to the instructions to use my tortillion in spacing the lines, so that they were more even, but it was still a fun piece to do. 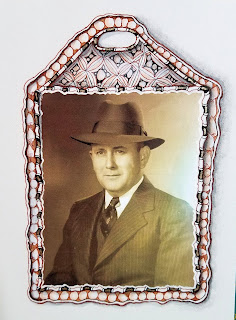 I next tangled a special piece. We lost our sweet Willow this year. At 18 1/2 years old, she finally succumbed to illness and passed. I miss her terribly as well as her brother, Bunkai, who left us the year before at 17 years old. I will get to his photo soon. Willow was always a delicate-looking tabby, but only in looks. I felt that Purk was elaborate enough for her beautiful green eyes. Here's to you, sweet girl. 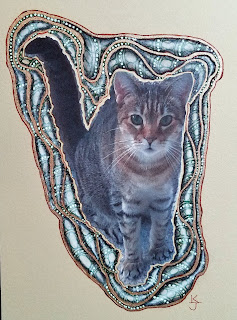 Posted by Tangled Moons at 12:51 PM No comments:

Something new has been introduced lately in the Zentangle World - Zen Buttons. Developed by CZT Marguerite Samama, who was influenced by Rick Roberts' and Maria Thomas' primer lesson on Recticula and Fragments. They are highly addictive and so beautiful. The best thing is that they're loads of fun to make, from base to finished product. I am so grateful for the influence of so many people in Zentangle, including my students.

My main, completed almost, button above was done with colored pencils, layered with some markers. I found the result a little difficult to lay down ink over the waxy pencil. I tried using white charcoal pencil, but ended up with the white Zentangle pencil.

I got the idea of trying an art spinner to lay down some base color from Eni Oken. I have been experimenting today with different pens/markers and a little water color.  I found an art spinner at Michaels that was battery-driven and pricier than I had planned to spend, but I had a coupon, so it came home with me yesterday. The following attempts use different markers.

I first tried using just Tombow markers, brush end on watercolor paper. I like how smoothly this went on. By holding down the pen in one spot, I was able to get a darker line or section. I think this helps with shading later and keeps me from having to use as much overlay of shading, marker or pencil.

I next tried some of my Spectrum Noir pens on watercolor paper. I wasn't getting the coverage I wanted, so tried watercolors blended with Tombow marker with a water brush. I think my water brush was a little too wet, hence the color streaks that I didn't want. I do love the earthy colors, so I will tangle this later and just see how I can incorporate these streaks. 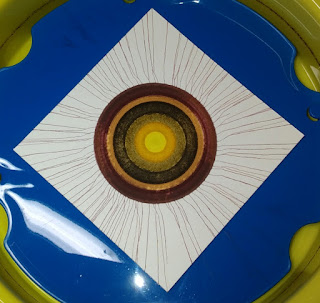 I next tried the Spectrum Noir pens on cardstock. It had even less coverage than on watercolor paper, but still an interesting effect. One thought is that the white spaces may work into a highlighted area when tangled. After all, I'm looking at these spins as just a starting point. I think I could sit with this spinner just making circles all day. I also have a lot of watercolor pieces left from making the watercolor explosion boxes. I am getting some ideas now of what to do with them! 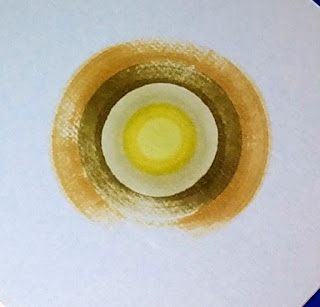 Posted by Tangled Moons at 2:42 PM No comments: 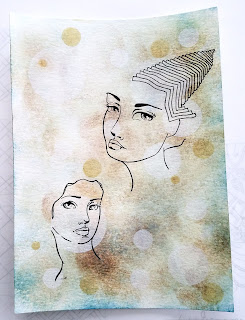 We had a really fun class yesterday. As usual, I overplanned, so we didn't quite finish like I had wanted to. In any case, we did get the backgrounds done, each student creating a unique bokeh effect on watercolor paper. They used Tim Holtz and Stampin' Up! stamp pads to lay the foundation, then overlaid them with Brillance white stamping ink and their circle stencils. I had cut these on the Cricut machine. My students said they would need an entire weekend to do this whole class. I am planning to do this again on video to offer as an online class, hopefully starting on it next week. I know my students have enough experience, however, to finish these on their own. I can't wait to see their finished art pieces. 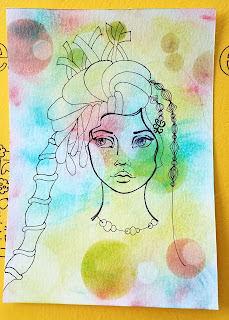 Bokeh is a photography technique, but can be replicated with stamps. You can get different effects depending on the materials used. While my students worked, I placed the white circles on the base of a watercolor explosion box that I had inked with Tim Holtz spray inks. I loved the effect. It does take a lot longer to dry than the ink pads. Maybe I saturated it too much with multiple layers. I love the effect and the look. I'd love to do an entire box with this technique.
I'm posting the partially finished work to show the different looks that can be gained with Bokeh. I'll add the finished picts when they're done.
Next week, we will be creating doilies with Martha Stewart punches to use a lacy mandalas.

Posted by Tangled Moons at 6:24 AM No comments: 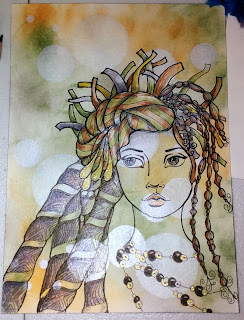 I have two new classes in the works, plus I'm now working on doing these both in person and online. The online classes are going to be a little further down the line as I continue to be busy with my Etsy shop, Tangled Moons. I'm not sure if these will be downloadable or as Google Chat/Skype-style classes to be done live one-on-one or with a group. I'm very open to both. 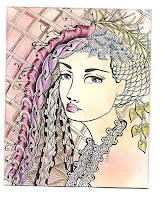 The first class, in person, will be March 14th, Wednesday, right now planned at my home in Goldsboro, NC. We will be using Jane Davenport face stencils to tangle a Mother's Day or other type greeting card. We will use stamps to pre-color the background using a bokeh effect, next stamp faces, then finish with tangles for hair, jewelry, etc.

The second class will be creating layered zendalas, Wednesday, March 21. We'll be using Martha Stewart punches to create round doily-like forms. The background will be some lovely gray Stonehenge paper sheets I purchased a few years ago from Ann Grasso. We will tangle the die-cuts as well as the gray sheets, then layer to create additional depth. 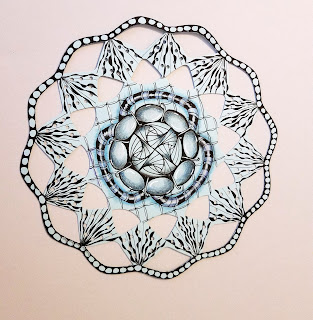 I have also been subcribing to Eni Oken's classes for a while now. She is another CZT who comes up with some incredible ideas. I love her idea for organizing tangling projects/classes onto recipe cards. I am hoping to start using these for my own classes taught and bugeoning ideas. We haven't had our coffee tangling meetups for a while now and I think this would be a really fun project to share ideas. I find myself with too many notebooks taking up too much space. To eliminate some of these is my goal here. I'd like to divide my "stuff" into sections: Stepouts (which could be further broken down into border tangles, organic tangles, compatible tangles, etc), Classes taught, New Ideas, etc. Between an upcoming craft fair, new classes developing, Etsy orders, husband's birthday and company coming (housework!), I need some way to channel everything to get done!

As always, I welcome feedback and ideas.
Posted by Tangled Moons at 7:01 AM No comments: 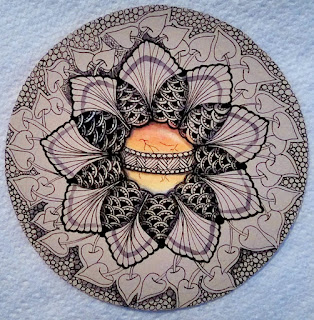 Please join us tomorrow to explore the Zendala. I've pictured here an almost finished Zendala that will be taught. Other examples will also be provided. As usual, students are encouraged to choose their own tangles if they wish.

Zentangle: Zendalas®:
Wednesday, October 25, 10:00 - 12:00. Class is planned for two hours, but may run longer. Students will benefit from having taken Zentangle 101.
$20.00 for instruction. Students should purchase the Sakura® Zentangle® Zendala Tool Set. These are available from Michael's.

“Mandala” is usually translated to mean a circular shape of patterns organized around a center. It can also be used to represent wholeness or even as a model for the organizational structure of life itself. The geometric flow and circular structure of mandalas seems to invite the use of the Zentangle Method. The two meet to create a beautiful work of art. In this class, we will use pre-strung circular tiles to build mandalas with tangles, or ‘Zendalas’. New tangles will be taught to fill in the mirrored sections of our paper tiles. Students will choose compatible tangles for centered as well as border patterns. A demonstration will be provided for developing one’s own Zendala strings. Students are provided with all needed materials. Students should be familiar with the basic techniques of the Zentangle Method prior to taking this class.
Posted by Tangled Moons at 12:41 PM No comments: 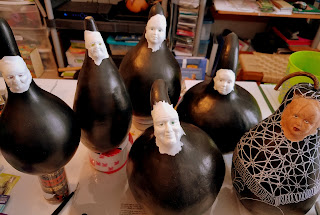 I have the faces on and will tint tomorrow before the Zendala Gourd Witch Class. I have new tangles to use for the "skirts". The gourds are painted with outdoor black paint which has a sealer. The faces are made with air-dry clay. This tends to be a little dry and has some cracks, perfect for the weathered "witch" or forest person faces. I wish I had found the glass beads used for the eyes when I started the sample gourd. These really brought the faces to life. I still need to add the hats/scarves and hair, a great way to use up some odd yarn stashes.
I still have a few spots open. Send an email if interested in attending: tangledmoons2@gmail.com. 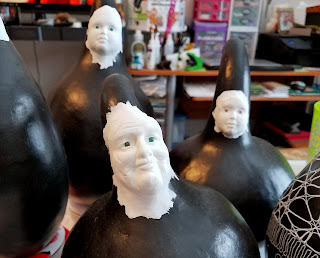 Class details are listed on my Classes page.
Posted by Tangled Moons at 11:25 AM No comments:

Kathryn Jacoby is a Certified Zentangle Teacher as well as a One-Stroke Painting Instructor, weaver, gourd artist, spinner, knitter, and crochet enthusiast. She has had original artwork featured in the books, Step Out in Style, Vol I by Caren Mlot and in 500 Tangled Artworks, A Showcase of Inspired Illustrated Designs by Beckah Krahula. She has taught basketry and gourd design through the North Carolina Basketweavers' Association and currently teaches Zentangle and paper crafting in her home in Goldsboro.

The Zentangle® Method was created by Rick Roberts and Maria Thomas. The Zentangle Method is an easy-to-learn, relaxing, and fun way to create beautiful images by drawing structured patterns or tangles®.

Almost anyone can use it to create beautiful images. It increases focus and creativity, provides artistic satisfaction along with an increased sense of personal well being.

Zentangle® is a registered trademark of Zentangle, Inc. Learn more about this art form at www.zentangle.com.